From Singapore to the UK, Codebots grows globally

As we continue our international mission of continuous modernisation among enterprises, we are now thrilled to announce our entry into the UK market!

Having recently been a part of The Australian Landing Pad program in Singapore, Codebots has already been sparking interest among SMEs and larger enterprises abroad. The use of outdated legacy systems within such organisations has been proven to pose a myriad of problems prevalent across not only all sectors and industries, but also borders internationally.

The Codebots technology and methodology is a world-class means to the end that is the continuous modernisation of software. Now is the time to introduce it to our second international region and largest market yet, the UK!

With a booming start-up scene and often referred to as the fintech capital of the world, London sits at the heart of Europe’s tech space. Naturally, it makes sense for Codebots to set up shop in such a global hub for business that has always been among the world’s fastest growing cities.

It’s no secret that the UK economy has been in the spotlight more recently due to the uncertainty surrounding Brexit, specifically around concerns for market growth generally. Despite this, the Commonwealth secretariat claims that intra-Commonwealth trade could increase to Â£700 billion by 2020 “ well above the Â£390 billion recorded in 2016.

The national economy of the UK is the fifth-largest in the world, and is home to many large industry sectors ranging from banking and finance and IT, to engineering and manufacturing. A single organisation in one of these sectors may contain hundreds, if not thousands of outdated legacy systems that are in desperate need of modernisation.

As you may be starting to see, this is a total addressable market of an enormous scale, and one that is in desperate need of Codebots!

IP EXPO Manchester is widely regarded as Europe’s number one enterprise IT event, with a focus on showcasing the latest technology and innovations to help businesses evolve with the constantly changing digital landscape.

Not only will Codebots be in attendance, but we are also excited to announce that our CEO, Eban Escott, will be among the 120+ speakers at this established event. As businesses throughout the country continue their search for the ideal digital transformation solution, those in attendance at IP EXPO need not look any further than Codebots.

This is just the beginning of our global mission to rid the world of legacy systems, and both the UK and Singapore are home to more of these than any other market we have previously explored!

Making our way into one of the world’s largest tech hubs, Codebots talks digital transformation at the IP Expo in Manchester, England. We believe that everyone should have a seat at the table when creating the technology that shapes our world and that’s why we support fantastic industry groups like Women in Technology. Check out the video made by our team. 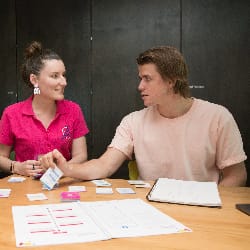 Trnding teams up with Codebots to connect brands and advocates